Do you ever wonder what characters would cook if they got into the kitchen? I sometimes do, because often I find I’ve written an entire book, or read an entire book, and the characters have been too busy doing…um…other stuff to actually make an entire meal. Strange, really, in the case of my own writing since I’m a devote foodie! With that in mind, Foodie Friday was born.

Sometimes it’ll just be a recipe I particularly like, or maybe some strange food fact I’ve come across. On occasion you’ll find a short story involving a character from my or other author’s books getting crazy in the kitchen. Foodie Friday is about the love of food, in all its forms, so come back often for a little taste!

This week, please enjoy a short story featuring Prudence, Will and a couple of my favorite automatons from my Steampunk novel, Beyond Prudence. Poor Prudence really isn't well equipped to be let loose in the kitchen, and she knows it...

Prudence looked down at Alexander. The mechanical fox looked back at her with an encouraging expression. “Go on, then. It can’t be that hard. A bit o’ bread and cheese is all it is.”

“Easy for you to say,” interjected Ollie from his perch above the counter, rattling his white-and-gold feathers and giving a derisive hoot. “You’re not the one doing the cooking.”

Tightening the apron strings around her waist, Prudence looked from the plethora of ingredients on the counter to the receipt she’d carefully written out. It did indeed sound easy while Cook explained it, but now she wasn’t so sure. Give her some paper and charcoal and she knew exactly what to do, but cooking? You may as well ask her to repair one of Will’s automatons.

But she so wanted to do something for Will. Fixing a late supper on Cook’s day out seemed like just the ticket.

Taking a deep breath and tilting her chin to a determined angle she said, “I can do this. I want to do this, for Will.”

“There you go.” Alexander nodded. “The gov’nor will appreciate it, I’m sure.”

“Indeed, indeed,” Ollie said, clicking his beak. “Whatever you give him, he’ll love. Besotted with you, he is.”

Grasping the saucepan as though it were liable to bite, Prudence approached the stove with dragging steps. Just as she was breathing a silent prayer not to make too much of a mess and incur Cook’s wrath, the speaking box in the corner squawked.

“Prudence? Damnation—” there was the sound of something falling and additional curses before Will continued. “Darling, where the dickens are you?”

“The kitchen?” Surprise and curiosity sharpened his voice. “Why?”

“I…” Prudence looked around, but neither Alex nor Ollie seemed inclined to come to her aid. She lifted her chin another notch, although he couldn’t see her. “I’m cooking supper.”

He sounded so decisive, it took her by surprise. Will wasn’t usually inclined to issue orders to her. Prudence wasn’t sure she liked this new side to him.

“I will be there as soon as I’m finished here.” She could be decisive too. He mustn’t think that just because she adored him, he could turn into a bully!

“Let Clifford deal with it, darling. I’ve got more…important…things to do than have supper.” His voice dropped low, took on the caressing tone she knew and loved so well. “I’ve got the AS arranged in that new configuration we spoke about and need you to test it.”

Well that was different, she thought, already halfway across the kitchen, the apron fluttering to the floor behind her, anticipation lending wings to her feet. What Will could do with that machine was far more delicious than anything she could cook up.

Left in the kitchen, Alexander and Oliver exchanged glances.

“I don’t think they’ll want to eat after all, do you?”

Oliver shook his head and clicked his beak with laughter. “Not Welsh Rarebit anyhow.”

And Alexander’s look of shock only made the owl laugh even harder.

Below is the recipe for what Prudence would have cooked if she hadn’t been so—e-hem—rudely interrupted.

8oz grated, strong cheese such as Old Cheddar
1 tablespoon butter
2 teaspoons Worcestershire sauce
1 level teaspoon dry mustard
2 teaspoons flour
4 tablespoons stout (beer or milk may be used if preferred)
A pinch of pepper
4 slices bread toasted on 1 side only (I like a denser bread, like Italian, rather than sandwich bread. If using sliced sandwich bread, lightly toast both sides)

Put the cheese, flour, mustard, Worcestershire sauce, butter and pepper into a saucepan. Mix well and then add the stout beer or milk to moisten. Do not make it too wet. Stir over a low heat until melted and when it is a thickish paste, remove from heat and stir just a few times more. Leave to cool a little, and toast the bread. Spread the rarebit over the untoasted side and brown under a hot broiler. Serves 4. 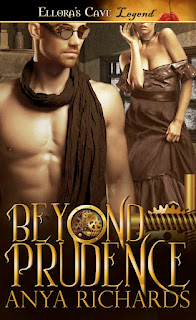 The mysterious device in Prudence Hastings’ basement could be the answer to her prayers, if she could just figure out what it is. Needing William Foreman’s help, she’s prepared to do whatever it takes to gain it. Even putting aside her dislike of machines and volunteering to test the risqué apparatus he’s developing for the Acolytes of Concupiscence.
Will’s expecting a lightskirt for a test subject and is horrified when he realizes the tempting woman he just debauched is very much a lady. But despite his best intentions, something keeps drawing him back to her, and it isn’t just the thought of discovering the inner workings of her uncle’s last invention. Unlocking their passions is turning out to be a far more pleasurable, if dangerous, job.
Beset by desire, automatons, secrets, an unintelligible maid and the danger of utter ruin should their association become known, Will and Prudence haven’t a chance in hell of remaining unscathed.
Fire up the boiler, open the sluices and take cover. Something’s about to explode…

Beyond Prudence is now available from Ellora’s Cave, and you can read an excerpt here.