I had planned last week to start posting excerpts from my up-coming release, Stone-Hard Passion, but decided instead to give one last snippet from Fleeing Fate, which was released on July 3rd. It's been a great week, as the Pricked series of books launched and I buzzed around other author's blogs promoing and enjoying talking with readers. But this week I'm looking ahead, and want to introduce you to Vidar Jarlsen and Jasmina Elalmadhoun, troll and jinn, respectively. In this snippet, their journey into each other's arms is just about to begin, but only one of them has any clue that's the direction they're heading!

Please make sure to stop by all the other amazing contributors to SSS this week by browsing the list here. 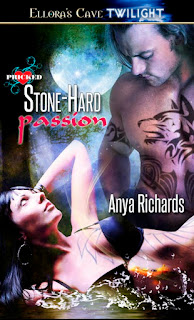 Startled, she automatically fell into step beside him, glancing up at him from the corner of her eye. He was looking straight ahead, as though there was nothing unusual about the fact they were holding hands. This from the man who couldn’t look her in the eye for longer than a couple of seconds when he first came to the Café to inquire about getting his tats.
She suppressed a giggle, amused at her surprise. They’d known each other for two years and she was shocked that he’d actually loosened up enough to hold hands with her…as a friend? Perhaps, if she were patient enough, in another ten she could get him into bed.
Posted by Anya Richards at 3:00 AM