I know the calendar says it's Monday, but it doesn't really feel like it, and I'm not complaining! It's still Canada Day...well the official day off for it anyway, so I'm keeping on my PJs a little longer (at least until I take Sable for a walk) and relaxing before I get back to my WIP. The kids will be all here for a BBQ later, but that's the only thing planned. How lovely! 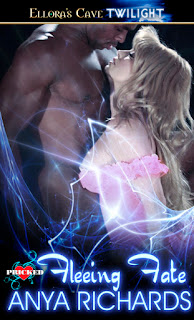 This week marks the release of the Pricked series from Ellora's Cave, and I get to lead off the tattoo hotness with Fleeing Fate! Today I'm blogging at Long and Short Reviews, Wednesday I'll be at the awesome Sidney Bristol's blog and on Friday I welcome S.J. Drum, who'll be guest blogging for Foodie Friday.
I'm really excited about both the Pricked releases and my on-going Unveiled Seductions series. I *squeed* like a pre-pubescent girl last week when the Final-final version of Stone-Hard Passion came in from my editor.
On June 26th we already got a sneak preview of Cynthia Sax's Pricked release, Tattooed Tryst, and over the next few weeks there'll be other authors dropping by to tell us about their up-coming books. It'll be awesome, so make sure to check back!
Posted by Anya Richards at 4:16 AM