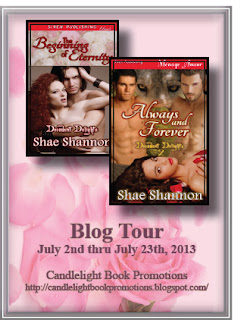 Shae Shannon was born in California where she lived until the age of 13. Her family decided to uproot and move to a small town in Oklahoma. It was fate, Karma, or coincidence that had put both Shae and her future husband on the paths of destiny and love. She spotted him in the back of a pickup truck while cruising town, his hot sexiness capturing her attention and her heart. One introduction later and she knew that he was her soul mate. Dustin was also from California, and had grown up only 30 miles from her.

After marriage, Dustin joined the Army. They spent 9 years in northern New York and 4 years in Georgia. He served 3 tours overseas, and numerous stateside training exercises. It was during the long, stressful, lonesome deployments that Shae found she could escape into imagination and majestically teleport into juicy books. Her most prized gift came in the form of a kindle, sent from her husband in Iraq. She quickly filled her digital library, and adds to it every week.

They are blessed with three kids ages 16, 10, and 5. Two dogs, a hamster, and a fish make for a chaotic crazy daily routine that Shae handles like a pro, and with a lot of humor.

Needing to branch out more, Shae picked up her laptop and began to write, allowing her boisterous imagination to fly. After what seemed like an eternity, she finally created her first novel that soon became published by Siren Publishing. She was finally on the path of her dreams of becoming an author.

Shae currently lives Oklahoma, where the tea is sweet, the grass is green, and people still say ma’am and thank you. Every summer, they load up the family and head for the lake for swimming and fishing. There is not a water park or swimming pool in the world that could ever compare to a rope swing and a floaty. The only thing that will change is that Shae will be scribbling and writing as she floats on the water and works on her tan. 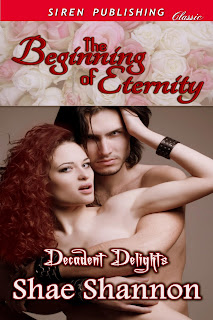 Book One: The Beginning of Eternity

The most exciting event of Chloe Kent’s life had been opening a coffee shop with her best friend Amy. Amy, who has wild and colorful sexual encounters regularly, finds it her duty to change her obsolete love life. One girls' night out turns Chloe’s ordinary life upside down. When she runs into the man of her dreams, her libido goes into overdrive. She has finally found someone that is a hot, mouthwatering, pantie-twisting party of orgasms wrapped up in a sexy hunk of a man who just happens to be a vampire. Just when things start to heat up, someone wants to sacrifice her. Freakin’ figures. Gabriel Jacobs has been waiting centuries for his one and only mate. He must work to capture her heart, while protecting her from an ancient evil vampire with a self-made Frankenstein army. With his growing need to claim and protect her, their destiny is on the line. Can this be their beginning of eternity? 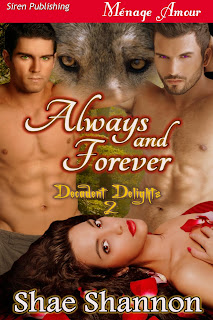 An alpha wolf, and an alpha panther—both of which are hot, sexy, brick walls of ooh-la-la wrapped up in "yes please, give me more"—decide to pursue Giselle Shalay, things explode in a supernova of desire and need. She is torn between what her body craves and what her mind protests. She is a free-spirited, independent witch who could never succumb to the role of an obedient, mindless, submissive wife. Aiden Grey refuses to share Giselle, whether Brandon Knight is meant to mate her or not. Brandon tries to show him reason, but any discussions end up in blows. When push comes to shove, he turns to his pack and declares war against the panthers in a fight to win her hand.

Can they come to terms with what fate has dealt and work together in convincing Giselle that her place is with them, or will egos and misconceived ideas keep destiny from joining their hearts forever?

Brandon spotted her from across the room. He was thunderstruck and rendered paralyzed. She was the most magically, erotically, sensually, gorgeous woman he had ever laid eyes on. Her movements were like a spell, weaving around her in a web of delight. When he was able to pick his chin up off the floor, he darted in her direction. A low rumble oscillated in the caverns of his chest, threatening to exit in a roar. Mine.

Giselle let go. Dancing was more than fun to her. It was a way of life. Her witch heritage used dance for many spells and rituals. It was part of her being, allowing her to shimmy and sway all stresses away. She was barely aware of the body that had pressed up against her from behind. The movements coming from her esoteric dance partner fueled the fire that had cast inside of her. She ground backward, against the steel structure who met her sway for glorious sway. She dipped down, entwining her arms as she went to touch the floor and arch her way back up. Without skipping a beat, she was turned and embraced in the cage of enormous arms. Her surprise was evident, but instead of her stopping or freezing momentarily, her mouth curved into a flirtatious grin at the violet-eyed, sexy hunk of meat holding her. She began testing him, intensifying her moving and curving against his body. She fluttered her way down his towering length, keeping her face a breath away from his body until she reached his crotch. Giselle lingered there for a moment, continuing her grinding to the beat of the song, before slowly making her ascent. A feral look flashed in his eyes.
a Rafflecopter giveaway