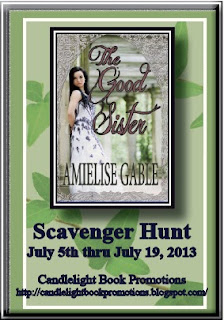 There are 10 (ten) stops for this Scavenger Hunt. Each stop contains a picture/button with a letter on it. All 10 letters form a message or phrase that is associated with the book. The letters are scattered randomly to the hosts. You will need to collect all 10, unscramble them, and then enter the decoded message in the Rafflecopter for the ‘extra entries’. Good luck! 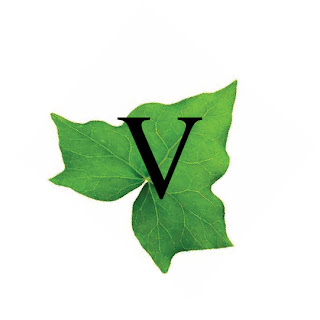 For as long as she can remember, Amielise Gable has been a fan of books, writing her first book on fruits and vegetables at age seven. Ever since, she has remained a voracious reader, and later, a book reviewer.

THE GOOD SISTER, a contemporary romance, is her first full length release.

In her spare time, Amie enjoys gardening, photography, and old black and white movies where the hero always gets the heroine.

Visit her blog at: http://www.amielise.com

After her mother’s sudden death, Ryanne Myers is home again. It has been fifteen years since she escaped Mount Pleasant and everyone and everything in it. Now she must oversee the closing of her mother’s affairs.

The only bright spot is Ryanne’s blossoming friendship with boarder CJ Richter. Ryanne senses that CJ just might be her soul mate, but the handsome excavator is somewhat of a standoffish loner.

After an unthinkable event, Ryanne’s life spins out of control, and she must deal not only with her grasping, selfish sister, but also a manipulative, wannabe suitor. CJ offers Ryanne a way out, but at what price? Beware: Everyone has secrets in Mount Pleasant…And they enjoy them!

Drama, romance, mystery, and murder, all centered around a little town. THE GOOD SISTER is an outstanding debut novel from Amielise Gable. Ms. Gable presents the reader with a unique love story with a cast of endearing yet almost misfits, who each have their own foibles as well as qualities that make them dear to the reader’s heart.

Opening the front door, she found herself standing across from the stranger, who wore a black knit cap pulled down low on his forehead. His eyes hidden behind mirrored sunglasses, and his body shrouded by a heavy black jacket.

“I’m looking for Miss Myers,” he informed her.

She detected an ever so slight trace of an indefinable accent in his deep voice. “That’s me. You must be from the excavation team.”

She noticed how large his hand was when she shook it and how he towered over her. “Come on in. I guess you’re going to be my boarder for the next few months.”

“Well, Miss, it will be just for the minimum amount of time it takes to finish the job.”

He was just as anxious to leave as she was to get back to London and away from this mess. Good, she thought. Maybe that means he’ll finish the job ahead of schedule.

“That would be great, Miss.”

He followed her into the kitchen and she took his jacket and hung it over the back of a chair, but he waited until she offered him a seat before he sat. As she turned to place a steaming mug of black coffee in front of him, she caught her breath. He had removed his sunglasses. Not only were his eyes green, but ethereal. She had never seen anyone with eyes like his. They were spellbinding, and she wondered, if she looked long enough into his unique eyes, could they hypnotize her?

Quickly, she recovered and turned her attention back to the coffee before he noticed her stare. Or had he already noticed?

a Rafflecopter giveaway
Posted by Anya Richards at 6:36 AM