Woot! It's a fun tour, in honor of Danica Avet's new release, Primal Flavor, Book Three in the Cajun Heat Series. When you get a taste of Book One, Primal Song, from the excerpt in this post, I think you'll want to buy all three books!
Make sure to read the instructions for the Caption This contest, and have at it! 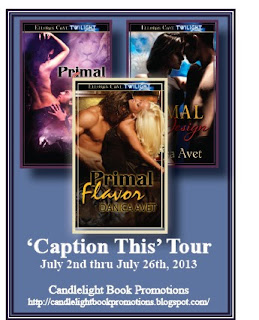 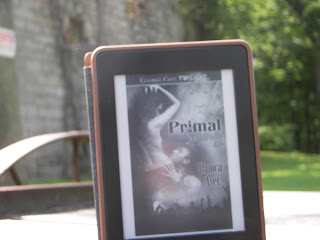 
To enter the Book specific ‘caption this’ contests you need to add your ‘caption’ as a comment on this blog. The author will be selecting a winner for each book-level contest from the captions left throughout the tour. Winners will be selected by author based on actual comments, not on random selection. ‘Best Caption’ wins. Make sure to leave your EMAIL address along with your caption in the comments. Winners will be notified via email.

Danica Avet was born and raised in the wilds of South Louisiana (that would be somewhere around Houma) where mosquitoes are big enough to carry off small children and there are only two seasons: hot and hotter. With a BA in History, she figured there were enough fry cooks in the world and decided to try her hand at writing.
Danica is the lucky pet of a compulsively needy dog and two cats. The pitter-patter of little feet has been known to make her break out into a cold sweat.
Writing is how she gives the voices in her head a way out. When she isn’t writing, working or contemplating the complexities of the universe, she spends time gathering inspiration from her insane family, reads far more than any sane person would want to, and watches hot burly men chase an oblong ball all over a field.
WEBSITE:http://danicaavet.com
http://www.facebook.com/DanicaAvet
http://twitter.com/@DanicaAvet
BLOG: http://danicaavet.wordpress.com/
EMAIL: danica.avet@gmail.com 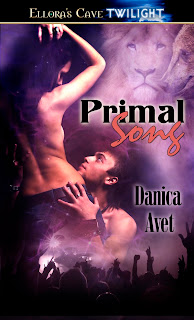 Deputy Daisy Picou is not impressed when Ram Reinhardt prowls into town all rock star swagger and big cat ego. She’s been burned by a lion before and has no intention of playing the fool twice. But with one scorching glance the mating frenzy ignites and passion trumps reason. An intense first encounter levels Daisy’s reservations—and most of her living room. And she’s not so sure she minds.

Ram Reinhardt has burned through and brushed aside just about every adrenaline-inducing thrill life’s thrown at him. But Daisy sets the gold standard for a premium rush. Her combative personality should turn him off, but every time they fight they end up in bed, or on the floor, or against a wall—and the sex is always more combustible than the time before. He’s not about to give that up. Ever.

“My nose tells me otherwise.”

Some big-ass bear she turned out to be. She wilted at his words. Her robe slid off her shoulders to pool on the floor, the tie having given up the fight when he knocked her down. He bent his knees so the hard crown of his cock nestled right up against the slick lips of her pussy and glided back and forth. Her heart thumped in time with his slow, easy movements. Her cheeks burned with embarrassment and arousal at how wet she was for him, for a complete fucking stranger.
“I…physically, yes, I can do this, but I shouldn’t,” she protested weakly. Hell, she leaned forward and arched her hips back.
Ram’s cock settled between her folds, their combined slickness helping him slide along her groove. Her breath hitched every time the head of his cock brushed over her clit. She clenched her hands into fists against the wall, rocking her hips back to meet his gentle thrusts.
“Why not?” he whispered against her nape. His fingers pinched and teased her nipples. “Why not enjoy this?”

Yeah, why not? You want him, he wants you. It isn’t like he wants to mate you. It’s just sex. Oh the temptation was there, or rather behind her with a huge cock and clever hands, but she’d promised herself she’d settle down. This was not settling down and being responsible. This was insanity.

Legal Information:
- Entering this contest means you have read, understood, and agree with all rules and regulations stated.- Entrants must be 18 or older (or age of majority in your country) to enter and to win.- No purchase necessary.- Void where prohibited.- All stated rules are subject to change without notification or reason given.- Chances of winning vary widely based on the number of entries received.- Prize is as stated. No substitutions or exchanges.
- Contest host/organizer is not responsible to misrepresented/mis-typed email addresses, spam filters, mailer demons, and other internet wackiness that may crop up at the time of winner notification.
- Winners are final.- Contest Starts 00:01EST July 2, 2013 and Ends 12:59EST July 26, 2013 and open to International participants- Winners will be notified via email, twitter, or facebook no later than 12:00EST August 2, 2013 -Respond by date to collect prize is 14 days from notification date.
Posted by Anya Richards at 3:00 AM