Today I'm so happy to welcome my good buddy Cara Carnes, stopping off during her book tour to give us a peek at her latest release Weekend Menage, available now from Ellora's Cave. She's also hosting a giveaway in conjunction with her tour, so make sure to enter for a $50 gift card for Amazon, Barnes & Noble or All Romance E-books. 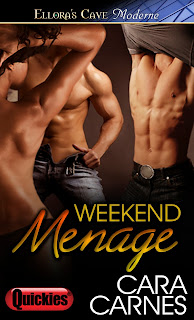 Blurb:
One night of controlled passion is all she allows.
Rebecca Ann Majors fled the temptation of a ménage once, but now the two sexy men starring in her wildest fantasy are back and demanding her complete surrender for the weekend. Emboldened by lust, she succumbs to her desire and learns ecstasy has a price.
They demand everything she has and more.

Joe Davenport and Dillan Morrisey were used to handling any situation—including the sexy siren who’d sashayed out of their lives two years ago. This time she’ll quench their lust even if it means they have to share her.

When Sunday morning dawns the three must decide if one weekend was enough to sate the passion they shared.

Tingles burst across her skin on their way to her pussy. She writhed against the sheet and nuzzled her pillow with fervor. Warmth spread through her body like a molten stream of awareness as her mind slowly returned to live mode and took in its surroundings.
The pillow was a chest—a very broad chest rippling with ridges and contours she could spend an eternity licking. She moaned as the previous night rewound in her mind and angled need between her legs where the sensuous torment of tingles continued.
She thrust her mound toward the wondrous delight. A groan punctured the silence, but she couldn’t tell whether it was hers or his.
Two men.
The recollection sent a shock wave bursting within her limbs.
“It’s about time you woke up.” Joe trailed a finger across her cheek. “We started without you.”
So she noticed. Her king-sized bed had never been quite so challenged. Joe reclined across the top, his back nestled against the headboard as if he were indeed a pillow. Her nightie had disappeared. Her legs were spread-eagled across the sheets.
And Dillan knelt there, his fingers tickling and tormenting her wet pussy. He leaned down and kissed her trimmed mound. “Finally, I can feast on you.”
His tongue slid across her wet slit, then thrust into her. She gasped at the entry, her entire body humming with the need for release. Her pulse spiked, her adrenaline surged. What a hell of a way to wake up.
Joe’s mouth slid across hers, forcing her attention to divide between him and Dillan as he tongued her pussy. Nerve endings beneath her skin burst as he kissed his way from her lips, down her throat, and to the swell of her breast.
Her hands ran down his massive chest and squeezed his arms. Her thighs clenched Dillan as he sucked on her clit. The surroundings disappeared in a sensuous haze. She writhed between the two men as the release carried her away from reality.

Bio: Born in small-town Texas, Cara Carnes was a princess, a pirate, fashion model, actress, rock star and Jon Bon Jovi’s wife all before the age of 13.