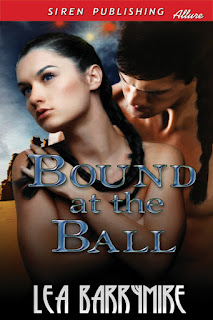 Blurb:
Rella Cinder was born to the submissive race on her planet and has finally reached the age of maturity. She has hated her nature since birth and has fought her submissiveness. As the youngest of four sisters, she’s watched the others go off and look for mates. This time she’s forced to comply with the government’s edicts, which includes attending the Unity Ball and taking a mate from the warrior species. What she doesn’t know is that she has already caught the eye of a warrior before stepping foot into the Ball.
Warrior Sabar T'Brun is ready to take a mate but doesn’t want a weak female. He sees what he craves in the willful Rella during her Initiation Ceremony. Her sweet submission and soft cries of passion are exactly what he wants in a mate.
Can they find each other before the Unity Ball ends? Or will someone else claim her?
Purchase Link to Siren Bookstrand:
http://www.bookstrand.com/bound-at-the-ball

“You taste so sinfully sensual, my little Rella. Let’s continue. How did my hand on you feel?”
He kept asking questions she didn’t want to answer. She huffed and then tried to cover up her irritation before he saw it. He might approve of her answers, but that didn’t mean he’d allow her to be disrespectful. She schooled her face to the blank mask she always wore and answered him. “It felt good, Master Sabar.”
He shook his head. “Not good enough. I want to know what your body felt like. What did you want when I pulled my hand away?”
“I didn’t want you to stop. I can still feel the fire your touch created,” she answered grudgingly.
“That’s the type of answer I want. Thank you. I didn’t want to stop either, but if I didn’t, you’d be naked and spread out under me.” He growled his words against her temple just before kissing her hair.
Those words sparked a need so deeply in her that she shied away from the intensity. Somehow she’d ignored the possibility that they could have sex. The thought of having this male above her, invading her body and space should have terrified her, but it did nothing but stoke the already molten puddle of heat in her belly. A gush of warmth flooded her pussy. She wiggled on his lap and gasped when she felt the beads of her belt move against her clit. She’d forgotten about them, and the reminder that she was mostly naked caused another flood of moist heat to coat her cunt.
“Gods, I can feel your honey coating my leg. You like the idea of my fucking you?”
She gasped at the raunchy term but couldn’t stop herself from nodding. Yes, she absolutely liked the idea. She didn’t know exactly what she wanted him to do, but she wanted something more. Her training had included some instruction in sexual behavior. She knew what sex was, what the positions were for mating, understood what some males enjoyed. Those lessons didn’t translate well into real life. No one had explained how her body would mutiny and desire a man more than her brain did.
“For your reward I think you need to straddle my legs.” His voice dragged her from her introspection. With a show of muscular strength he picked her up by her waist, turned her to face him and placed her gently over his legs. Her arms were still bound behind her back and the new position took more movement away from her as he widened his knees until her legs were opened. A glance down showed that her shaved nether region was completely open, visibly on display. A rush of warm wetness between her pussy lips made her blush.
“Hmm, you like being open to me, don’t you? This is an amazing view and I’m not sure I will ever want to see you clothed. I’m going to touch you and kiss you as your reward. You can’t stop me. Don’t struggle.” He leaned forward and whispered the last few words, warm breath feathering over her cheek.

About Lea Barrymire
Lea lives in Western New York with her hubby, three children, and miscellaneous critters. Before the rugrats, she lived a life of adventure, following her husband all over Europe with the US military. She’s slept in a car outside Paris, drove six hours just to see tulips in the Netherlands, and knocked ash from her shoes at Pompeii. Now she spends her time in life’s adventures at soccer games, PTA meetings and school plays.
Lea has loved reading from a very young age, spending many sleepless nights devouring books. Science fiction and paranormal were her favorite genres to read as a teenager, and that love bled into her adult life. She started writing during a bout of insomnia, to fill time, and found it filled a creative void. Now she communes regularly with the characters in her head and tries not to laugh out loud when they say something funny.
When Lea isn’t reading, writing or corralling kids, she enjoys watching movies and science-y shows, or just kicking back and listening to some music.