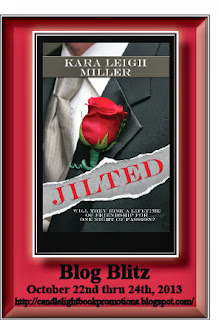 Welcome to Kara Leigh Miller on her 'Jilted' Blog Blitz! Make sure to visit her other stops for more excerpts and chances to win one of two different books Kara's offering as prizes!

Today, Kara resides in Upstate New York with her husband, five kids, three cats, and two dogs. When she's not reading or writing, she's spending time with her family and friends.

Nothing excites Kara more than hearing from her fans. So, send her a note. She'll go total fan girl over it! 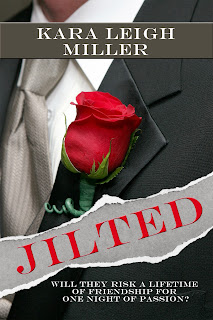 Amy and Brett have been friends since they were kids; and their friendship has withstood the test of time. But can it withstand Brett's fiancée, Vanessa?

Brett Hudson has often wondered what it would be like to be more than Amy's friend, but when he's chosen as the newest professional dancer on Dancing with the Stars, he meets Vanessa, one of the shows costume designers and it's a whirlwind romance that ends in a wedding proposal. As the big day draws closer, Brett begins to think that marrying Vanessa might be a bad idea. She wants him to give up Amy. Completely. Will he give up his best friend for the woman he's supposed to marry?

Amy King is heartbroken to learn that Brett is marrying another woman. But, when Brett is jilted at the altar, he begs Amy to go on his honeymoon with him. A week on a tropical island with her best friend, the man she's fantasized about for years is a dream come true for Amy. But when Brett suggests crossing the line from friends to lovers, Amy is reluctant. Will she risk years of friendship for one night of passion?

"I'm telling you, man, this is a mistake," Steven said.
Brett glanced at his brother, annoyed. "Mom said the same thing to me earlier." The wedding was scheduled to start in less than twenty minutes, and he was going to take his place at the altar to wait for his bride. Once he took his spot, he looked out at the seated guests.
Steven put his hand on Brett's shoulder. "We all know the woman you should be marrying is sitting out there," Steven nodded, "fourth pew back."
Brett's gaze landed on Amy, who was talking to his mom. Amy looked gorgeous, as usual. She said something to his mom, and then laughed. The sight of her smiling face made him smile, until he realized that he wouldn't get to see her like that very often anymore. "Amy and I are just friends."
Steven laughed. "Stop wearing your ass as a hat and open your eyes. Amy King has never been just your friend."
"That's real nice, Steven." Brett sighed and shook his head. Marrying Vanessa wasn't a mistake. It wasn't. And Amy was just his friend. He was doing the right thing by marrying Vanessa. Wasn't he?
"I'm your brother. I don't want to see you make a mistake."
"Exactly. You're my brother, which means you should support my decision. I love Vanessa. I'm going to marry her."
Steven shrugged. "If you say so."
Brett turned and glared at him. "And you decided to have this conversation with me now? Ten minutes before Vanessa will be walking down that aisle. Nice timing." He went to run his hand through his hair, but stopped, not wanting to mess it up. Vanessa hated when his hair was messy. She said it made him look sloppy, as though he didn't care. Amy never seemed to mind though. In fact, she laughed at him every time he messed up his hair. He sighed and turned back around to look out over the pews. His gaze once again wandered to Amy.
"It's not like you've been around much. It’s been kind of hard to talk to you," Steven muttered.
He was right. Brett had been occupied with Vanessa and pulling the wedding together in such a short amount of time. "I know. Sorry."
They were silent for a few moments before Steven leaned close to Brett's ear and whispered, "It's not too late, Brett. You can still call this off."

- Entering this contest means you have read, understood, and agree with all rules and regulations stated.- Entrants must be 18 or older (or age of majority in your country) to enter and to win.- No purchase necessary.- Void where prohibited.- All stated rules are subject to change without notification or reason given.- Chances of winning vary widely based on the number of entries received.- Prize is as stated. No substitutions or exchanges. Residence of the United States only.