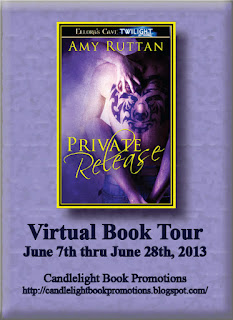 I'm so excited to be kicking off my good friend Amy Ruttan's virtual book tour, and on the release day of Private Release to boot! I'm telling you...this book is awesome. I'm so lucky, I get to read a lot of Amy's stuff before it gets published and I loved this book so much. I think everyone else will too, and I asked Amy to tell me how she started writing her bear shifter books (the heroes are sooo yummy!) and this is what she had to say. There's an excerpt and a giveaway too! 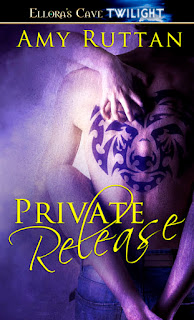 I want to thank Anya Richards for having me here today. Not that she had much of a choice, as she’s my critique partner. *insert evil laugh here*

She wanted me to talk about my bear shifters, or my bears.
I still remember when I sent Private Release to her, to read before I sent it to my awesome editor, Shannon. Anya’s words were, “I almost missed my bus stop because of you!”
That was music to my ears.
I never intended to write about bear shifters. They came about because of the Oh! Canada call for submissions at Ellora’s Cave.
I was writing something with the RCMP in it, but it was falling flat. I couldn’t get past 1k and the deadline was looming fast. Out of the murky depths of sheer PANIC Gordon Thomas (the hero from Mounted Release) walked into my brain and shifted into a bear.
I chose a bear because I wanted to keep it a Canadian animal and having a Loon or Beaver shifter wasn’t what Gordon was. He was a bear, through and through. As was my heroine. 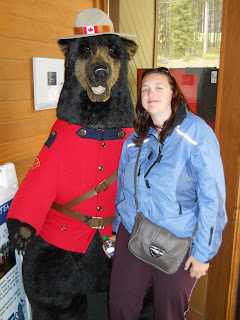 This is a picture of me and Jasper the RCMP bear at Jasper National Park, July 2012. See, I’m not totally crazy in my idea of a Mountie Bear!
The next thing I knew my world of the Mukswa was born and Mounted Release was finished.
And that’s honestly where I intended to stop it…until the reader mail and reviews came in.
People wanted Jared (the heroine’s brother) and honestly, Jared wanted his story to be told.
Because of other commitments, an epic road trip across Canada and working on my first Harlequin release it took me a year to write Jared’s story, but Private Release was finally born, finito in January 2013 and I have to say I loved writing Jared’s story.
So much so, there’s another one in the works.
And maybe another…and another! ;)

Born and raised on the outskirts of Toronto, Ontario Amy fled the big city to settle down with the country boy of her dreams. When she's not furiously typing away at her computer, she's a mom to three wonderful children, who have given her another job as a taxi driver.
A voracious reader, she was given her first romance novel by her grandmother who shared her penchant for a hot romance. From that moment, Amy was hooked by the magical worlds, handsome heroes and sigh worthy romances contained in the pages and she knew what she wanted to be when she grew up.
Life got in the way, and after the birth of her second child, she decided to pursue her dream of becoming a romance author.
Amy loves to hear from readers. It makes her day, in fact. You can find out more about Amy at:

Jared Stevens hasn't been the same since he was shot. His duty is to marry a Mukswa woman and be a strong leader. He lets the elders of his clan choose his bride, because the woman he wants is only in his fantasies, the only woman who brings him to exquisite release.
Adele Banks loved being a Mountie, but one shot ended her career and altered her world forever. Adele is determined to make a life for herself. She's hired to recover Beare Enterprises embezzled funds, but what she didn't count on is being extremely attracted to her client when meeting him for the first time as he's naked in his shower.
Adele is Jared's mystery woman, but she's taboo. He bonds to her, but has to keep his society secret, as much as he wants to mark her as his own.
As Jared fights his own inner beast, remnants of the prior chief's wrath is affecting the clan and Adele. To save Adele's life, Jared may just have to betray his clan's secret and risk his heart.

“Chill, Bri. I was sleeping. Look, I have to go. I’m running late.”
“Don’t hang—”
Adele hung up the phone. She loved her sister dearly, but jeepers. She was obsessive when it came to checking up on her. Adele was disabled, not helpless for fuck’s sake.
The phone rang again. Adele growled and answered it. “Damn it. I have to pee, leave me alone.”
“Pardon?” The gruff male voice on the other end said.
Adele cursed under her breath. She recognized Jared’s scary body guard’s voice anywhere.
“Never mind, I thought you were someone else.”
There was silence, painful silence. “You often discuss urination with others?”
“No. Look, don’t worry about it. How can I help you?”
“Mr. Stevens will be sending around a limo to escort you to work today.”
“Really, that’s fine. I don’t need it.”
“Mr. Steven insists. The limo is on its way. Please be downstairs in ten minutes.”
The other end went dead and Adele hung up.
Dammit. There was no way she could shower, dress and eat in ten minutes.
Well, since they sprung this ride on her she was going to make them wait. It wasn’t as if her car was broken or anything. Sure it wasn’t the coolest ride, but the engine worked and she owned it outright.
They could wait.

Legal Information:
- Entering this contest means you have read, understood, and agree with all rules and regulations stated.- Entrants must be 18 or older (or age of majority in your country) to enter and to win.- No purchase necessary.- Void where prohibited.- All stated rules are subject to change without notification or reason given.- Chances of winning vary widely based on the number of entries received.- Prize is as stated. No substitutions or exchanges.
- Contest host/organizer is not responsible to misrepresented/mis-typed email addresses, spam filters, mailer demons, and other internet wackiness that may crop up at the time of winner notification.
- Winners are final.- Contest Starts 00:01EST June 7, 2013 and Ends 12:59EST June 28, 2013 and open to International participants- Winners will be notified via email, twitter, or facebook no later than 12:00EST July 1, 2013 -Respond by date to collect prize is 14 days from notification date.
Posted by Anya Richards at 3:00 AM