Welcome to the awesome Cara Carnes, here to tell us about her Pleasure Brigade series, and in particular Book Three in the series, Passion's Training. And there are not one but two giveaways, so make sure to enter! 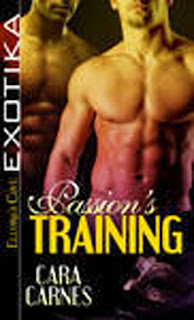 What happens in The Brigade stays in The Brigade…Viviana Marks crashes the annual Brigade masquerade with one mission—submitting to Chief of Security, Stryker. She isn’t about to pass up this opportunity to dabble in her BDSM fantasies with one of the best Doms around. Returning from a mission, Lance is surprised to discover an unknown woman posing as a former submissive of his. Curious, he assists Stryker in taking control of the sweet bundle of curves, sensuality and attitude. Viviana soon finds herself in a two-week training session with the two men, who are determined to unleash her darkest desires and awaken a need she’s ignored too long. When the time draws near to decide whether to continue her journey of sensual discovery, the true test is whether the tentative trust she’s built with the two Doms is enough to overcome her bitter past.

The Brigade Masters return to the office calmer than before and it is immediately clear the women had returned. They whisper amongst themselves as they take their appointed positions within the room with eased stances. Lance collapses in a chair in the corner and leans his head against the wall.

If you missed the first part of the interview, you can click HERE and read part 1 or HERE for part 2.

Cara: So the women are okay?
Stryker: No, but Santiago and Montgomery had our backs like always. They saw we were busy and insisted they go with them.
Kade: Autumn and them are more than capable of handling themselves but knowing one of us is with them makes me more comfortable.
Lance: Let’s get started. Stryker and I need to get together on something we’re planning for Viviana.
Cara: That brings me to my next question. *looks at Lance and Stryker* In the third book, Passion’s Training, it surprised me to find you two together.
Stryker: *growls* We are NOT together.
Lance: What the hell have you been reading?
Lorenzo: Enough you two. Don’t take your frustration out on her. You know what she means. You’re sharing Viviana.
Kade: *chuckles and smiles at Stryker* Your turn on the grills. Have fun.
Cara: Clearly they’re not thrilled that the women aren’t back yet. Tell me about Viviana. Why did you two decide to share her training?
Lance: We weren’t left with much of a choice. She showed up pretending to be a submissive who knew me. I couldn’t let that go, yet it was somewhat obvious that Stryker had no intention of taking a backseat. *shrugs* We decided it would be better to work together rather than either of us missing the chance to play with her.
Stryker: She was unique and I knew that from the start. Not many submissives could handle Lance and I together. We’re a bit…intense.
Cara: What surprised you most about Viviana?
Lance: Her personality. She was a lippy little sub and still is. *shifts in his chair* I figured out I like that a hell of a lot.
Stryker: Like I said, we’re intense. She gives as good as she gets and that’s a rare commodity.
Cara: Several people have asked about her brother. Have you all met him yet? In the book she was somewhat worried about how her relationship with you all would affect the business relationship he had with Brigade Enterprises.
Lance: What happens at The Brigade stays at The Brigade. Whatever we do or don’t do with Viviana has absolutely nothing to do with the business contract her brother’s company has with us.
Stryker: I’ve spoken with him on a few occasions. I have nothing but respect for him. His tenacity in landing the contract is why we found Autumn, after all.
Kade: *smiles* I believe she found you.
*the men laugh*
Cara: What’s one thing about her that you want readers to know?
Stryker: She’s smart as hell and that is sexier than anything else. She’s not afraid to be the geek in the room. I can’t tell you how many times I’ve wanted to drag her away from her computer when she’s tapping away on the keyboard with a pencil in her mouth.
Lance: *groans* And her glasses perched on her nose with her hair all over the place like she’s just had the ride of her life. Hell yeah. Stryker’s right. She’s not afraid to be herself and be the smartest one in the room. She gets that we don’t want a meek mouse 24/7. She’s a submissive when we scene and in the bedroom but everywhere else she’ll stand toe-to-toe with anyone.
Lorenzo: Between her and Autumn daily life at The Brigade has certainly changed. Poor Chase doesn’t know what to do with himself with the two of them underfoot shaking things up. All these guys have changed somewhat because of them. It’s a damn good thing.
Kade: They aren’t the only ones underfoot changing things around. You’ve certainly done your fair share of changing lately, man.
Cara: Speaking of Chase, where is he? I had a couple of reader questions for him.
Lance: They’ll have to wait. He’s having a tough time of it right now and has his hands full.
Stryker: *shakes his head and grins* His hands are full all right.
Cara: *looks at Lorenzo* We met Katey toward the end of the third book and it was rather obvious then there was a connection between you two. Not many men would’ve done everything you did for her.
Lorenzo: The adversity Katey went through and the financial difficulties she faced as result are her business. You’ll have to discuss that with her.
Kade: This might be a good time for another break. I have a call to make.

Ooh, to continue reading this interview of the Pleasure Brigade boys you’ll have to wait until April 24th and visit HERE.

Born in small-town Texas, Cara Carnes was a princess, a pirate, fashion model, actress, rock star and Jon Bon Jovi’s wife all before the age of 13.