Today I'm welcoming Sandra Sookoo who is stopping by to tell us about her book, Winning His Wife. Check out the trailer here, and make sure to enter the giveaway below for the chance to win a $10 Gift Card! 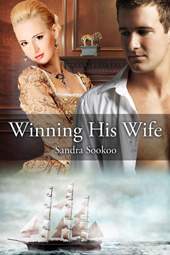 Fighting for independence goes beyond an infant nation, but love might just conquer all.

Captain Caleb Haslet has come home to Portsmouth, Rhode Island after two years at sea chasing pirates and keeping British ships from the fledgling American nation. He wants nothing more than to settle into domestic life and finally claim the new bride duty had forced him to leave behind.


Though she now has her own life doing charity work, providing prisoners with basic creature comforts, Abigail Haslet is both excited and anxious that Caleb thinks to take up where they left off. But, how can she give her heart to a man who'll leave again when duty calls?

Caleb no longer wants a marriage of convenience. When plying Abigail with kisses and spending time with her fails, he decides to take advantage of his wife’s stint behind bars to make her see the truth—he's in love with her.

“Is it the marriage you resent or my handling of the affair?” He stroked his hand over her bare buttock, back and forth, his touch so gentle she might have missed it if she hadn’t been so terribly aware of him. “Or perhaps it’s merely me you can’t stand.”
Yesterday had he asked her that, she would have had no qualms answering all three questions, but now, how could he be part of the problem when he created a magic unlike any other she’d ever known? When he stilled his hand on her backside, she whimpered.
“Answer the question please.” Though he kept his voice conversational and at a whisper, there was no mistaking the note of command.
“Your handling.” She licked her dry lips. “I am not chattel, Captain. I’m a woman who demands your attention the same as any man under your command, but since I am a woman, my wants and needs will always fall to the wayside when a man is in the mix.” Would he despise her free speaking, regret that he’d offered for her in the first place?
“I’m beginning to see I made a mistake.”
“In choosing me?” She hated that her voice sounded small and out of place in the darkness.
“No, in not asking for you sooner. I should have planned better so we had more time before my departure.” He glided his hand along her side to fondle her nipples once more. “I don’t want our union to be a farce, but you must promise me to curtail deporting yourself in a manner that shows both of us in an unfair light.”
The wonderful tension he’d created in her body faded under the safe wave of annoyance. She pulled his hand away from her person.  “You cannot expect me to follow your orders as if I’m one of your crew. A marriage is more than that.”
“Actually, it isn’t. A marriage and being part of a sailing crew are very much the same. They all come down to one thing—trust.” Caleb escaped her grasp. He inched his hand down the front of her body.  “Just as I demand trust from my crew, I ask it of you as well.”
The moment his fingers danced over her feminine curls, Abigail gasped. No one had ever touched her there, but the man who was her husband dared to go even further. With a gentleness that belied the man she assumed he was, he nudged her thighs apart. She let him. Dear heavens, how could she deny him? The curiosity became too much.
He slid a finger along her folds.
“Oh my.” I had no idea a man’s fingers on me like that could feel… There were simply no words for the way sensation surrounded her in a cocoon of wonderment.
“I want you to trust me, Abigail.” His voice reverberated in her ear and her chest. Strain rasped in his words as he left off his torment and rested his hand on her stomach. The hard bulge of his arousal pressed insistently against the small of her back. Obviously, that tiny moment had affected him as well. “You and I are bound in the eyes of the law, but I want more than a cold decree. I want to share with you the joy that can happen between a man and a woman.”

Sandra is a writer of romantic fiction. Her portfolio includes historical, contemporary, sci-fi, and paranormal romances in full-length books as well as shorts and novellas. No matter if the heat level is spicy or sweet, she loves to blend genres and oftentimes will add humor to the mix.


When not immersed in creating new worlds and engaging characters, Sandra likes to read, bake, taste new teas, watch The Big Bang Theory, and Psych as well as Finding Bigfoot and travel. Her favorite place to spend vacation hours is Walt Disney World: it’s where dreams come true and the soul can play. When she’s not writing, she’s keeping things interesting at her Believing is Seeing blog or spending time with her husband, who patiently answers questions she has about men, sci-fi-related subjects, and the odd “what if”.

Sandra loves to hear from her readers. You can write to her at sandrasookoo@yahoo.com.