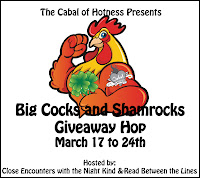 Happy St. Patrick's Day to all you crazy ale-drinking devotees out there, and even to those who just don't get the allure! In my family there's a special joke about St. Patrick's Day because although my husband is obviously of mixed races, his grandmother on his father's side was 100% Irish. So when St. Paddy's Day rolls around, we're inclined to ask people if they've never heard the term, "Black Irish" and try to get them to believe he's an example of that. The best part? On occasion we've actually got some people going for a while LOL!

Since this hop is in honor of Fondled and Gobbled, Someone Had To Do It and Going Back for Seconds, I'm gonna pretend my hero, Jace, is throwing himself into the spirit of the day and heading off to the neighborhood pub for a pint of green beer with his friends. What's that Diva wearing, you ask? Well, knowing Jace, he has on kelly-green skinny jeans, a silk shirt with gold harps all over it (you didn't think he'd go for the obvious and have shamrocks, did you?), a puffy, green, goose-down jacket that matches his pants, and black riding boots (with four-inch heels, of course). He wavered between his green-rimmed glasses and the ones he's actually wearing, which are gold, wire-rims, but he didn't want to be TOO obvious. Besides, the round lens make his eyes pop...

Here are the next three bloggers on this crazy, wonderful tour of ours:
Cara Carnes
Cristal Ryder
Page Flipperz

a Rafflecopter giveaway
Posted by Anya Richards at 8:00 PM