I'm really pleased to welcome Lena Loneson, author of God of Ecstasy, who's introducing us to a recipe that sounds truly yummy, as does her book. Enjoy!! And be sure to check out the blurb for God of Ecstasy after the recipe. 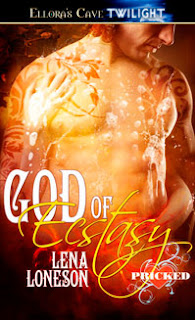 Thanks for having me on Foodie Friday, Anya!  I’m a novice cook myself, so I recruited a good friend (also one of my beta readers) for help with a wine-centred recipe: Risotto with Lamb Ragu.

My latest book, God of Ecstasy, is part of the Pricked series and features tattoos, which is what I’ve been talking about in my blog posts lately.  The tattoo part was easy for me–I have two myself, including a large back piece–but where I really needed to do research was with another important part of my book: wine.

My hero is Dionysus, the Greek god of wine, madness, and ecstasy.  He’s cursed by an evil djinn to remain trapped in a wine bottle, I Dream of Jeannie-style, for eternity.  He’s only released to fulfill three sexual fantasies whenever a woman rubs the bottle.

Before writing God of Ecstasy I knew a lot about beer, but almost nothing about wine.  I was inspired by a winery tour in upstate New York, where I discovered I really enjoyed a good white wine: particularly a dry Riesling or chardonnay.  The next step?  Cooking with it!

This recipe comes from my friend Garli, and I’ve taste-tested it myself, to much stomach happiness.

Have all the ingredients out on the counter, as you’ll be tossing them in different pots as you work.  The main thing you’ll need for this recipe is a good stirring arm and attention span (my own biggest hurdle), as you watch the pots.

Lamb ragu:
Add garlic to a large saucepan on the stove with some olive oil, until it starts to brown.  Add the ground lamb, breaking it up with a spoon.  Add rosemary, salt, and pepper, to taste.   Add half a small can of tomato paste and 1 cup of chicken stock.  Bring to a boil and let simmer for 10-20 minutes on the back burner.  You can start the risotto as it simmers.

Risotto:
For the risotto, you’ll need a large pot/pan (the heavier the better, helps it to heat evenly) in which to make the risotto.  Also, start a small pot with simmering white wine and a larger pot with 5 cups of simmering chicken stock.  (Note: Do not add cold liquid to the risotto, as it will ruin the texture.)
The main steps of the recipe involve a lot of mixing, so get your muscles ready!

In the large pot, add butter and chopped onions.  When the onions are transparent, add rice, and mix it up.  It should turn from a dull colour to a brighter white.  Then add ½ - 2/3 cup of simmering wine and a pinch of saffron.  Keep mixing while waiting for the liquid to dissolve.  When it’s dissolved, add 1 cup of the simmering chicken stock to the pot with the rice.  Mix until dissolved.  Repeat, adding 1 more cup of chicken stock each time, stirring until it dissolved, until the texture is as desired.  It should be very creamy but a bit al dente (firm but not hard) in the middle

When it’s done, stir in the rest of the ingredients (pine nuts, mint leaves, cheeses, and a little extra butter) and add the lamb sauce.

The risotto can be paired with the rest of the wine you used for cooking, if you’re looking to finish it off, or it goes well with a nice Italian red, such as a chianti.

Hope you enjoy!  Feel free to stop by and say hi at LenaLoneson.com or on Facebook or Twitter.
Lena

Jaime Leighton has had some pretty unremarkable sex in her lifetime. So when she rubs a bottle of wine and a hot, half-naked tattooed man appears in her bathtub, offering three fantasies, he’s pretty hard to resist. Dionysus claims to be the Greek god of ecstasy, wine and madness—and he can breathe underwater. Thus begins the best three nights of Jaime’s life.

They also turn out to be the most dangerous, when the evil djinn who cursed her new sex partner attacks. Now Jaime must come to terms with her growing feelings for the god and break the magic spell inked into his arms before the djinn snatches away both her love and her life.