I interrupt my usual Monday morning rambling for a special occasion. Firstly, I'm over at Mina Carter's blog today talking about my Unveiled Seductions series. Secondly, I'm here talking about Mina...shhh, don't tell her!
If you’re into erotic sci-fi romances, I have two words for you—Aries Revealed by Mina Carter. Okay, that was five, but you get my drift.
I’ll tell you first off exactly why I like Mina’s books. Besides awesome plots and hunky, baby-let-me-take-you-home heroes, Mina’s heroines are tough. I mean, really, really tough. And they go through stuff I don’t think I’d have the balls to put my heroines through. They get beat up, and feel it. They deal with some serious shit, and get through it with sheer grit and determination. Maybe I’m cruel, or perhaps I’m just a realist, but I like that—a lot.
I also like the easy yet lyrical cadence of her writing. There’s nothing stuffy about it, but it flows and bubbles, taking the story along with enviable ease.
All right, enough of that…let’s talk about Aries Revealed.
Cyborg Johnny Ram has the hots for Milly, even though all he knows about her is that she comes to watch his stripper act. Milly has the hots for the illusion Johnny projects on stage, but she doesn’t believe she would ever be able to attract a man that gorgeous. She has baggage, and when Johnny finesses himself into her life neither of them realize just how heavy that baggage will turn out to be, for both of them.
I’m not going to give away the plot…oh, no I’m not *sticks out tongue*. What I will say is Johnny’s hot, Milly’s by turns funny and sad, together they kick ass and have some incendiary sex. So, what you waiting for? Go buy Aries Revealed and enter the world of Mina’s cyborgs.
Oh, and Mina, when’s the next one coming out??? Don’t make me come find you… 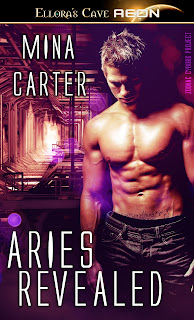 Sometimes the best place to hide, is in plain sight...
Johnny makes a living on the strip circuits. His most popular routine? The Aries 7000. Bronzed and oiled, he pretends to be the scourge of the universe, one of the deadly and outlawed zodiac cyborgs. But Johnny isn’t really a stripper playing a cyborg. He’s a cyborg playing a stripper.
Milly, a freighter captain, has had a thing for the sexy stripper for months. But when Johnny, the subject of many of her hottest fantasies, asks her out to dinner, she runs. All is not lost, however; a chance encounter yields an Aries 7000 sexbot, hers for a weekend of pleasure.
It seems too good to be true. Sex with the man of her dreams without risking her heart. But Milly’s bot has some secrets…secrets that could save her life when the past returns to haunt her.
Available from: Ellora's Cave | Amazon | Amazon UK | ARe