It’s an exciting time to be affiliated with a really good e-publishing firm. The world is changing, and publishing too is in the midst of a massive overhaul. Business as usual just isn’t cutting it anymore, and smart people are actively looking for new ways to publish and deliver books to the people who want them. I may be biased, but to me e-publishing, and companies like Samhain, are not just the wave of the future, they’re the wave of NOW.
I still have to put up with people saying things like, “Soon you’ll really be published,” although I’ve had the pleasure of two releases. It’s just ignorance, so I stifle my annoyance and tell them that I already am published, and leave it at that. Then I read an article like this one, in Time Magazine on-line, and realise irrespective of those views, I’m probably on the right track. Sure, it would be nice to be able to say I have a NY contract with Avon, or Berkley, or one of the traditional publishing houses. But there is a part of me that would rather not deal with issues like massive returns and bogus sales numbers.
Besides, there is news like Lorelei James topping the movers and shakers list at Kindle, which makes us romance writers know the readers are out there, and they’re following the trends. Instead of a book in every hand, how about an “E-reader in Every Hand” campaign? 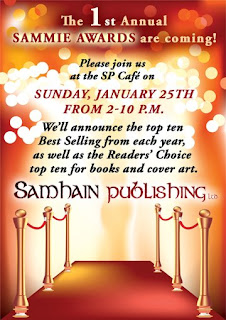 And for all you readers interested in what the most popular books were at Samhain this past year, the best covers, etc. make sure you join us for the Sammie Awards! It’s gonna be a blast!

Posted by Anya Richards at 7:55 AM