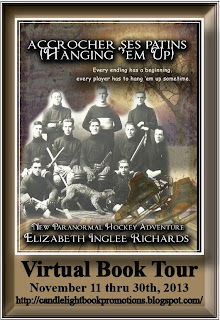 Elizabeth Inglee-Richards is a writer of urban, and suburban fantasy. She loves writing about fairies, werewolves, witches and what have you, all set in the modern world. She particularly loves the tension created when the paranormal world touches our real world. Her work is mostly set in Delaware or Massachusetts, the only two places she knows well enough to set fiction. 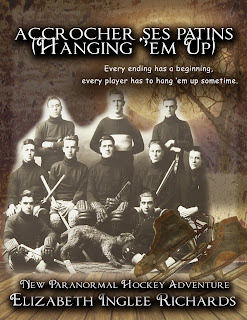 In the nineteen twenty’s the world of Ice Hockey was changing forever, spreading south into the US markets. Two young lovers from New Brunswick were preparing to get married when the young man is offered his dream job as a goalie for a team based in Halifax. The couple has no idea what changes they are going to have to make for the team that doesn’t just wear the Hyena, they become the hyena quite literally.

“We should walk and let the men discuss business. I have been told that there is a lovely path to the water from here; we could walk on the beach.”

I didn’t feel as though it was my place to tell her that a walk along the beach in the winter was not all that pleasant. Not much was lovely in the winter. I stood and went with her; if this was what Jennot wanted, I would not ruin it for him. Marie and I walked a ways in the cold before she said anything.

“Your stitches,” she said, “so neat and tidy on the other men, but noton Jean-Mark?”

“He will not let me take my time with him,” I said with a laugh, “He wants to pretend nothing hurts him.”

She nodded as if what I said was important, “Where did you learn to stitch?”

“My father is a sail maker. I can stitch anything,” I told her. It was a source of pride for me.

“Good,” she said. She fell quiet for a few moments, and then she told me, “We can use that. The team takes care of its own. Jean-Mark will be paid and given a job for the off-season; you will be given a home in Halifax. And we will find you a home for the summer. It will be safer than this,” she said with a sweeping gesture to the sea, “My father was taken by the sea,” she added in a quiet voice.

“Jennot’s was as well,” I told her. “Do you love him, or is he just the closest boy?” she asked me quickly. She had turned and was looking at me fiercely.