Today I welcome the awesome Jayne Kingston with her Mischievous Matchmaker tour! Jayne kindly answered a few questions for us, and has offered a gift card and Key Party key tag as a prize to one lucky entrant. And check out some of her other stops for additional chances to to enter. Have fun! 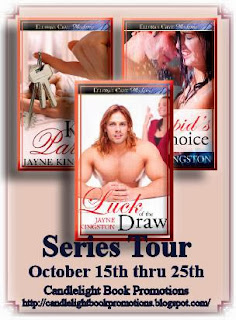 When Jayne Kingston was growing up she spent many hours daydreaming about a time when she could flee the too-small town in Ohio where she grew up and run laughing for the sunny West Coast. Of course she stuck around and raised her family in that small town instead, and doesn’t regret it for a moment. Now she spends her days dreaming about the delicious fun two people can have while falling in love.

In your opinion, what makes a great hero?

In any type of story and in any type of situation, I want my heroes to react with integrity when they’re challenged to do the right thing. Even if he starts out as the most self-centered, self-serving creep on the planet, I want it to be their first gut reaction to be to step up and run into the face of danger. Bold fearlessness goes a long way with me.

Do you prefer strong women for heroines, or the ‘damsel in distress’ type?

You know, my first reaction to this question was “Ugh. Damsels.” And then I stopped to think about my stories and realize I write them quite a bit. I got a kick out of writing Bree in Cupid’s Choice because she’s sort of a reluctant damsel. She’s extremely independent for the most part—until she finds herself in a situation where she needs to be rescued, that is. And it was too much fun that she wasn’t especially thrilled about the hero on hand at the time.

Do you have anything in common with your characters?

I sneak a little something of myself into my characters here and there. I’m sure most writers do. Slipping in a belief here or a principle there not only adds another facet to the character, but it helps me, the writer, connect with them in a personal way. Especially if one of my characters has a vastly different personality from mine, which most of them do.

What item, or items, is absolutely necessary to your writing mojo?

I have a drawing of a hand with a finger pointing—think Uncle Sam and “I want YOU!”—that’s pinned to the corkboard above my desk. One of the writers in my Saturday morning group always points her finger at all of us when it’s time to stop chatting and start working. That drawing reminds me to get my butt in my chair and write, no excuses.

I also have a framed quote from Dita Von Teese that says “You can be the ripest, juiciest peach in the world, and there’s still going to be somebody who hates peaches” that helps me keep things in perspective.

What’s the strangest (neatest, coolest, etc) thing you’ve ever done?
Back when my oldest was just a baby my husband and I stayed with friends at a cabin they had on a small lake up in Canada. We had to take a boat from a dock to the cabin itself. It had no running water or electricity and the outhouse was something out of a bad dream. (Seriously. The spiders that lived on the ceiling were the size of plums, I swear.) We ate fresh fish cooked on an open fire every night and bathed in the lake, and one night we got to see the Northern Lights, which were both eerie and spectacular. It was the most amazing vacation I’ve ever been on.

What are you currently working on, or what’s on the horizon?

I’m currently working on a short story to tie up one last loose end in the Mischievous Matchmaker series. I kind of left someone hanging, and I tried to tie his story up at the end of Luck of the Draw, I really did, but then someone twisted my arm and I *had* to write this last book. (Just kidding. She said she “would like to read” so-and-so’s story and I caved. I’m so easy.)

After that’s finished I’ll be getting back the series that has spun off last year’s Ink Lust. 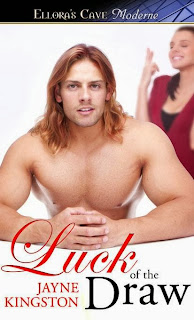 Luck of the Draw: Book 3

Turnabout is fair play. Or maybe karma is a bitch is more fitting.

Wanting to repay the favor she did for them, Petra’s friends throw her a key party to help her move on from a months-old heartbreak. While she is not interested in falling in love again, getting her stunted sex life back on track doesn’t sound like a bad idea.

Except someone sabotages the key drawing before she gets her turn. Instead of spending the night with the ultra-hot doc her friends intended to “accidentally” set her up with, she winds up drawing her good friend Alex’s keys instead.

A night with Alex is coveted among players. Petra quickly finds out the reality of Alex far exceeds his legendary reputation. The moment they kiss they discover a chemistry so combustible it’s positively nuclear. Instantly engulfed in a red-hot haze of passion, neither of them sees it coming when Petra’s ex returns, repentant and threatening to ruin their newfound happiness.

- Entering this contest means you have read, understood, and agree with all rules and regulations stated.- Entrants must be 18 or older (or age of majority in your country) to enter and to win.- No purchase necessary.- Void where prohibited.- All stated rules are subject to change without notification or reason given.- Chances of winning vary widely based on the number of entries received.- Prize is as stated. No substitutions or exchanges.- Contest host/organizer is not responsible to misrepresented/mis-typed email addresses, spam filters, mailer demons, and other internet wackiness that may crop up at the time of winner notification.
- Winners are final.- Contest Starts 00:01EST October 15th, 2013 and Ends 12:59EST October 25th, 2013 and open to International participants- Winners will be notified via email, twitter, or facebook no later than 12:00EST October 29, 2013 -Respond by date to collect prize is 14 days from notification date.
Posted by Anya Richards at 7:01 AM