Safe in His Hands Blog Tour

I'm so excited to feature my dear friend Amy Ruttan's first Harlequin Medical release, Safe in His Hands. It's a wonderful story of reunited love, set in Canada's north, a fascinating place that deserves to be highlighted a lot more than it is. I think you'll love it, and I'm so happy to know Amy will be having a number of other releases in the Medical series. She's such a talented author! 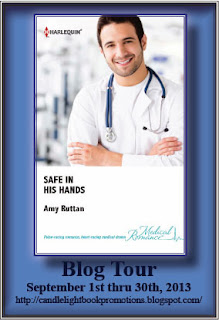 Safe in His Hands 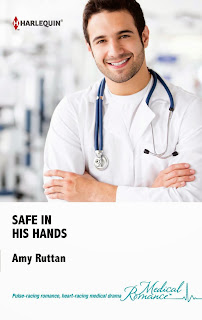 Dare she place her heart in his care?

Dr. Charlotte James will do anything to save her best friend's unborn baby--even turn to her ex-fiancé, Dr. Quinn Devlyn! Their relationship ended badly after the loss of their own little miracle, and while Charlotte trusts the hotshot neonatal surgeon's amazing ability, she doesn't trust the man who buries his emotions in work....

A career-threatening injury has left Quinn at a crossroads in his life. But, working with Charlotte again in the snowbound beauty of her isolated community practice, he realizes he's been given a second chance to prove that both the baby and Charlotte's fragile heart will be safe in his hands....

Dr. Charlotte James had been watching the arrivals board in the Iqaluit airport for some time. She was so focused on arrivals she didn't even notice the people coming and going around her. A watched pot never boiled, or so the old saying went, but she couldn't help it. This was probably the longest she'd ever stood still. In her job there was no time to stand still. In fact, she hated it. She could be doing so many other things. Filing, for instance.

Not that she particularly liked filing. She preferred her organized chaos. However, there were a ton of files on her desk, and Rosie had been pestering her for a week to put them away. Instead, she was waiting here for his flight to arrive.

The past, when it came to Dr. Quinn Devlyn, was where it needed to be: firmly locked away. She'd moved on and she had no doubt his life had, too.

He was, after all, at the top in his chosen specialty, and she was right where she'd always wanted to be.

This time Quinn Devlyn wouldn't blindside her or suck her into some crazy off-kilter distracting, albeit passionate, love affair.

Her life was good. Not perfect but, then, whose was? Charlotte was happy. Courage.

She spun around and saw the plane taxi in on the small airstrip, blending in with the stark, white landscape of Canada's High Arctic. The only color out there was the brightly painted houses that dotted the landscape. Her pulse thundered between her ears.

The pit of Charlotte's stomach dropped to her knees. No. Scratch that. Make it the soles of her feet. Not since her MCATs had she felt this way, as though she was perpetually on the verge of hurling.

She was seriously beginning to doubt her sanity in bringing her ex-fiance up to Cape Recluse. It wasn't a place where she could avoid him easily. He'd be constantly underfoot and she was dreading every moment of it. Would she be able to resist him? The only time she had resisted him had been when he'd left. When their relationship had ended, she'd never wanted to see him again, but his presence here now was a price she was willing to pay to help out her friend. Get a grip on yourself.

A blast of cold air shook her from her reverie. Her gaze focused on the tinted windows, watching the passengers head across the tarmac to the warmth of the bright yellow airport building. Immediately she picked Quinn's form out of the group of passengers.

Tall and broad, even though he was huddled down under his collar against the cold. Just the sight of him made her heart beat a little bit faster, her cheeks heat and the butterflies in her stomach go crazy. Her pulse thundered between her ears like a marching band. She hadn't seen him in five years--not since he'd walked out on her--but he was making her feel like a giddy teenager again.

Don't let him affect you like this, Charlotte chastised herself. She'd moved on with her life. The wound he'd left in her heart had finally healed.

The double doors opened and he stepped into the airport, moving to the side to let more people in from the frigid cold. He set down his luggage and unwound his scarf.

Damn, he still looks as good as ever. Charlotte had been kind of hoping Quinn's fast, career-driven lifestyle would've caught up with and aged him, but he looked as sexy and charming as ever.

Even from a few feet away she could see there was a bit of gray around his sandy-brown temples, but it suited him. Made him look more dashing and debonair.

Born and raised on the outskirts of Toronto, Ontario Amy fled the big city to settle down with the country boy of her dreams. When she's not furiously typing away at her computer, she's a mom to three wonderful children, who have given her another job as a taxi driver.

A voracious reader, she was given her first romance novel by her grandmother who shared her penchant for a hot romance. From that moment, Amy was hooked by the magical worlds, handsome heroes and sigh worthy romances contained in the pages and she knew what she wanted to be when she grew up.

Life got in the way, and after the birth of her second child, she decided to pursue her dream of becoming a romance author.

Amy loves to hear from readers. It makes her day, in fact. You can find out more about Amy at: